Alternating Current is a form of the electric power generated and mostly used in the world. The magnitude of alternating current changes continuously with time and its direction is reversed periodically. It is represented by

where, T is the time period or period of ac It is equal to the time taken by the ac to go through one complete cycle of variation.

As we know an alternating current is given by

In one complete cycle average current

Hence the dc instrument will indicate zero deflection when connected to a branch carrying ac current. So it is defined for either positive half cycle or negative half cycle.

Then, mean value of current

The notation RMS refers to Root Mean Square, which is given by square root of mean of square current. 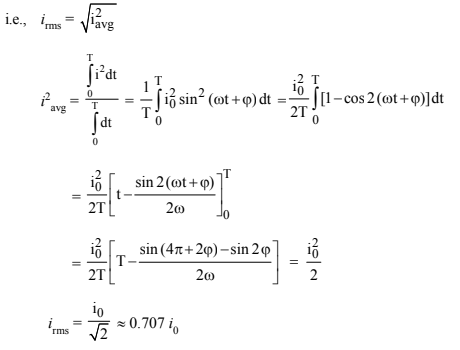 Similarly, the RMS voltage is given by

The voltage across the resistor will be

The thermal energy developed in one-time period is

So in ac circuits, current and ac voltage are measured in terms of their rms values.

For eg. if house hold supply is 220V ac it means