Hi, Myself rajkumar, a passionate teacher having learning and teaching interest in Science subjects.

Redistribution of Charge between Two Capacitors

When s charged capacitor is connected across and uncharged capacitor, the redistribution of charge occurs to equalize the potential difference across each capacitor. Some energy is also wasted in the form of heat.

Suppose we have two charged capacitors C1 and C2 having charge Q1 and Q2 after disconnecting from their respective batteries having potential V1 and V2. These two capacitors are connected to each other.

Force on a dielectric inside a capacitor

When a dielectric slab is inserted between the charged parallel plates, the slab experiences a force as shown in figure.

Force on the dielectric slab is given by

Where V = potential difference between the slabs at that instant.

Note: This force is independent of x (distance by which initially the slab inserted.)

E-x and V-x curve inside capacitor

If the distance between plates of a parallel plate capacitor is 5d. Let the positively charged plate is at x = 0 and negatively charged plate as at x = 5d. Two slabs one of the conductor and other of a dielectric of equal thickness d are inserted between the plates as shown in the figure. Electric field and Potential versus distance graph will look like: 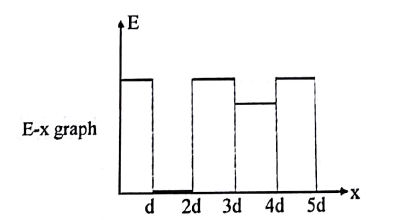 When two conductors joined together through a conducting wire, charge begins to flow from one conductor to other till both have the same potential, due to flow of charge, loss of energy also takes place in the form of heat.

Suppose there are two spherical conductors of radii r1 and r2, having charge Q1 and Q2 respectively. If these two spheres are connected through a conducting wire, then alteration of charge, potential and energy takes place.

Energy of a charged conductor

When a conductor is charged its potential increases from 0 to V as shown in the graph; and work is done against repulsion, between charge stored in the conductor and charge coming from the source (battery). This work is stored as “electrostatic potential energy”.

In charging capacitor by battery half the energy supplied is stored in the capacitor and remaining half energy (1/2 QV) is lost in the form of heat.

This stored energy, stored uniformly in the electric field in the volume, Energy density (u) is defined as energy per unit volume (volume = Ad)

We have calculated this for parallel plate, but this is true for all air or vacuum capacitors. If a dielectric medium is completely filled between plates, then energy density becomes 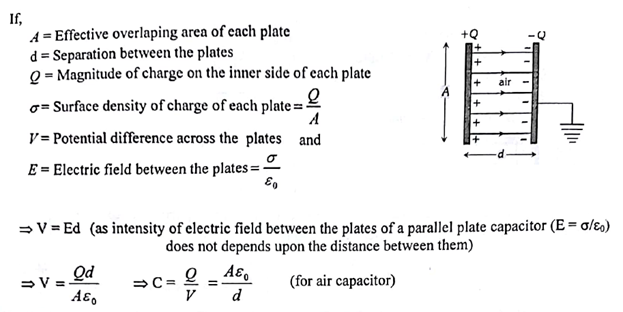 Force of Interaction between the plates of a parallel plate capacitor

If dielectric is placed between plates Force remains same because electric field inside dielectric is charging but not in vacuum or air. Intersection of dielectric is also there to counter this force of attraction.

A capacitor of capacitance C gets charged when a battery is connected across the plates. The plate attached to the positive terminal of the battery gets positively charged and the one joined to the negative terminal gets negatively charged.

Once capacitor gets fully charged, flow of charge carries stops in the circuit and in the condition potential difference across the plates.

Capacitor is a device that stores the electrical energy. It is also named condenser. Any two conductors of any shape, separated by an insulator (or vacuum) forms capacitor.

The symbols of capacitor are

Voltage of Capacitor is potential difference between two conductors.

Where V1 and V2 are the potential of two conductors.

Now onwards we can call is as V.

Capacitance is a slope of V-Q curve, mainly of three types – Spherical, Cylindrical and Parallel plate.

Capacitance charge given to a conductor increases it’s potential.

If A and B are two sets containing 3 and 2 elements respectively. What would be then the no of subsets of AxB?