I am a Professional M.Sc post graduate teacher having specialization in Chemistry. I am always interested and excited to teach students or help the other as well. I teaches Physics, Chemistry, Biology, Science, etc classes ranging from IX to XII.

1. Viruses are not included in the classification since they are not truly ‘living’.

2. Viruses are non-cellular organisms that are characterized by having a crystalline structure outside the living cell.

3. Once they infect a cell they use the machinery of the host cell to replicate themselves, thereby killing the host.

4. The name Virus means “venom or poisonous fluid” was given by Pasteur.

5. D.J. Ivanowsky (1892) recognised certain microbes as causal organism of the mosaic disease of tobacco. These were found to be smaller than bacteria because they passed through bacteria proof filters.

6. W.M. Stanley (1935) showed that viruses could be crystallised and crystals consist largely of proteins. They are inert outside their specific host cell.

8. In addition to proteins viruses also contain genetic material that could be either RNA or DNA. No virus contains both RNA and DNA.

12. These capsomeres are arranged in helical or polyhedral geometric forms.

14. In plants, the symptoms can be mosaic formation, leaf rolling and curling, yellowing and vein clearing, dwarfing and stunted growth. 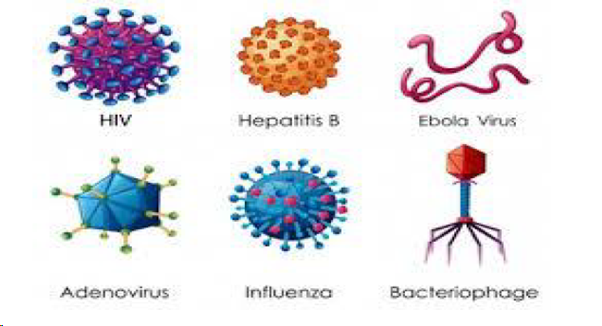 2. It was smaller than viruses and caused potato spindle tuber disease.

3. It was found to be a free RNA; it lacked the protein coat that is found in viruses, hence the name viroid.

4. The RNA of the viroid was of low molecular weight.

1. Lichens are symbiotic associations (mutually useful) between algae and fungi.

2. The algal component is known as phycobiont and fungal component as mycobiont, which are autotrophic and heterotrophic, respectively.

3. Algae prepare food for fungi and fungi provide shelter and absorb mineral nutrients and water for its partner.

4. So close is their association that if one saw a lichen in nature one would never imagine that they had two different organisms within them.

5. Lichens are very good pollution indicators – they do not grow in polluted areas with Sulphur-dioxide. 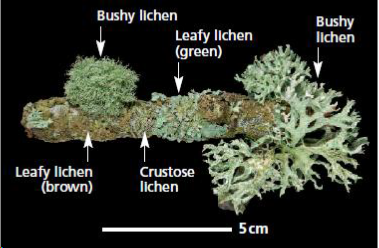 At the end this module we get a clear understanding on the basics of Biological classifications of Living organisms in detail. You can access the test module for this topic by clicking on the following link.

Kingdom Animalia either directly or indirectly depend on plants for food (Classified as Herbivores and Carnivores).

They lack a cell wall and digest their food in an internal cavity and store food reserves as glycogen or fat.

Their mode of nutrition is holozoic – by ingestion of food.

They follow a definite growth pattern and grow into adults with definite shape and size.

Higher forms show elaborate sensory and neuromotor mechanism. Most of them are capable of locomotion.

The sexual reproduction is by copulation of male and female followed by embryological development.

Kingdom plantae includes all eukaryotic chlorophyll containing organisms. They are autotrophic. They have a cell wall made of cellulose.

Life cycle of plants has two distinct phases – the diploid sporophytic and the haploid  gametophytic – that alternate with each other. This phenomenon is called alternation of generation.

· Found in aquatic habitats and on decaying wood in moist and damp places or as obligate parasites on plants.

· Asexual reproduction takes place by zoospores (motile) or by aplanospores (nonmotile). These spores are endogeneously produced in sporangium.

· Zygospores are formed by fusion of two gametes. These gametes are similar in morphology (isogamous) or dissimilar (anisogamous or oogamous). E.g., Mucor,Rhizopus (the bread mould) and Albugo (the parasitic fungi on mustard). 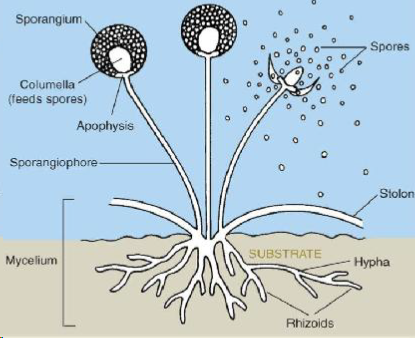 · They are multicellular (except Yeast, which is unicellular)

· Mycelium is branched and septate.

· The asexual spores are conidia produced exogenously on the special mycelium called conidiophores.

· Sexual spores are called ascospores which are produced endogenously in sac like asci. These asci are arranged in different types of fruiting bodies called ascocarps.

· Neurospora is an example of Ascomycetes used extensively in biochemical and genetic work.

They grow in soil, on logs and tree stumps and in living plant bodies as parasites, e.g., rusts and smuts.

· The mycelium is branched and septate.

· The asexual spores are generally not found.

· The sex organs are absent,

· Plasmogamy is brought about by fusion of two vegetative or somatic cells of different strains or genotypes.

· The resultant structure is dikaryotic which ultimately gives rise to basidium.

· Commonly known as imperfect fungi because only the asexual or vegetative phases of these fungi are known.

· The deuteromycetes reproduce only by asexual spores known as conidia.

· The mycelium is septate and branched.

· Some members are saprophytes or parasites while a large number of them are decomposers of litter and help in mineral cycling. E.g., Alternaria, Colletotrichum and Trichoderma.

a)      Plasmogamy- Fusion of protoplasm between two motile or non-motile gametes.

When a fungus reproduces sexually, two haploid hyphae of compatible mating types come together and fuse.

· In some fungi the fusion of two haploid cells immediately results in diploid cells (2n). However, in other fungi (ascomycetes and basidiomycetes), an intermediate stage called dikaryophase (2 nuclei per cell) occur.

· Later, the parental nuclei fuse and the cells become diploid. The fungi form fruiting bodies in which reduction division occurs, leading to formation of haploid spores.

The morphology of the mycelium, mode of spore formation and fruiting bodies form the basis for the division of the kingdom into various classes:

Kingdom Fungi organisms are heterotrophic (Saprophytes). Fungi are cosmopolitan and occur in air, water, soil and on animals and plants.

· Fungi are filamentous (except yeast which is unicellular)

· Their bodies consist of long, slender thread-like structures called hyphae. The network of hyphae is known as Mycelium.

· Some hyphae are continuous tubes filled with multinucleated cytoplasm – these are called coenocytic hyphae. Others have septae or cross walls in their hyphae.

· The cell walls of fungi are composed of chitin and polysaccharides.

· Most fungi are heterotrophic and absorb soluble organic matter from dead substrates and hence are referred to as saprophytes.

· Those that depend on living plants and animals are called parasites.

· They can also live as symbionts – in association with algae as Lichens and with roots of higher plants as Mycorrhiza.

a) Vegetative – fragmentation, fission and budding.

b) Asexual reproduction – by spores called conidia or sporangiospores or zoospores.

Kingdom Protista and Types of Protista

·  All single-celled eukaryotic organisms are placed under Kingdom Protista.

·  The cell body contains a well-defined nucleus and other membrane-bound organelles. Presence of flagella or cilia.

·  Protists reproduce asexually and sexually by cell fusion and results in formation of a zygote.

Protists can be further classified into:

· Chrysophytes in fresh water as well as in marine environments. Float passively in water currents (plankton). Most of them are photosynthetic in nature.

· In diatoms the cell walls are referred to as Frustule which forms two thin overlapping shells, which fit together as in a soap box.

· The walls are embedded with silica and are indestructible. Thus, diatoms have left behind large amount of cell walls deposits in their habitat over billions of years which is referred to as ‘diatomaceous earth’.

· Diatomaceous earth is used in polishing, filtration of oils and syrups.

· Diatoms are the chief ‘producers’ in the ocean.

·  Dinoflagellates Gellates are mostly marine and photoautotrophs. They appear yellow, green, brown, blue or red depending on the main pigments present in their cells.

·  The cell wall has stiff cellulose plates on the outer surface. Most of them have two flagella; one lies longitudinally and the other transversely in a furrow between the wall plates.

·  Red dinoflagellates (Gonyaulax) undergo such rapid multiplication that they make the sea appear red (red tides). They release a potent neurotoxin called Saxitoxin or paralytic shellfish toxin (PST) which may even kill other marine animals such as fishes.

· Most of Euglenoids are fresh water organisms found in stagnant water. Instead of a cell wall, they have a protein rich layer called pellicle which makes their body flexible.

· They have two flagella, a short and a long one.

· They have Mixotrophic mode of nutrition, they are photosynthetic in the presence of sunlight, when deprived of sunlight they behave like heterotrophs by predating on other smaller organisms. Therefore, they are known as connecting link between plants and animals.

· The pigments of euglenoids are identical to those present in higher plants. e.g., Euglena. 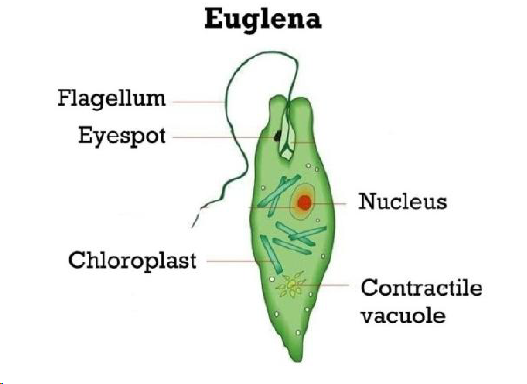 · Slime moulds are saprophytic protists. The body moves along decaying twigs and leaves engulfing organic material. Under suitable conditions, they form an aggregation called plasmodium which may grow and spread over several feet.

· During unfavourable conditions, the plasmodium differentiates and forms fruiting bodies bearing spores at their tips. The spores possess true walls. They are extremely resistant and survive for many years, even under adverse conditions. The spores are dispersed by air currents.

All protozoans are heterotrophs and live as predators or parasites.

There are four major groups of protozoans.

2. Flagellated protozoans: They are either free-living or parasitic. They have flagella. The parasitic forms cause diseases such as sleeping sickness e.g, Trypanosoma.

3. Ciliated protozoans: Aquatic, actively moving organisms. Have thousands of cilia. They have a cavity (gullet) that opens to the outside of the cell surface. The coordinated movement of rows of cilia causes the water laden with food to be steered into the gullet. E.g., Paramoecium.

4. Sporozoans: These organisms have an infectious spore-like stage in their life cycle. E.g., Plasmodium (malaria parasite). 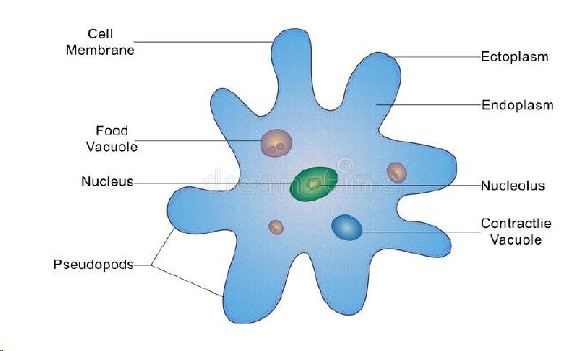 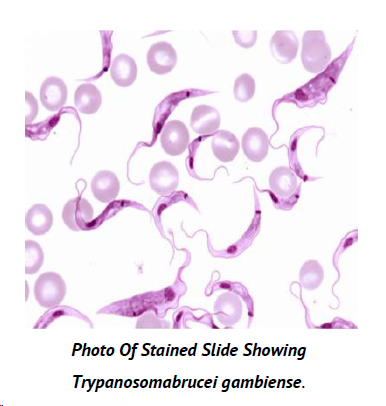 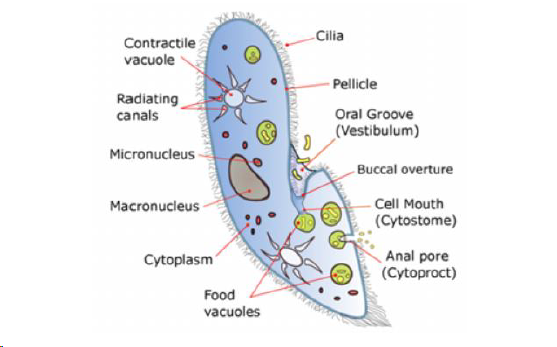 Being in the wrong place when an African elephant—mass = 6000 kg, velocity = 10 m/s—is charging can really ruin your day. How fast would a 1 kg cannon ball travel if it had the same kinetic energy as the elephant?

How would you expect the damage done to a brick wall to differ in the event of separate collisions with the elephant and cannonball?